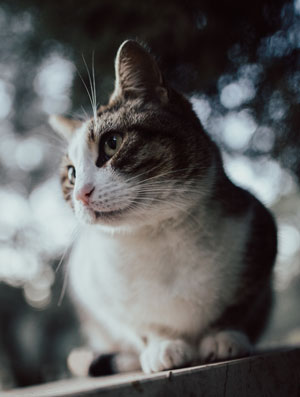 Nick came to see me to see if I could do anything to help Jack, his four year old cat who had been constantly itching for over two years and had chronic constipation for over 12 months.

Jack was having reactions to medication the vet had given him and also suffered from yeast infections in the ears, which he has had on and off every year. Jack was ripping into his eyes, which were puffy, half closed and red, and had lost hair from various parts of his body. He would get so itchy that he would damage his eyes and ears and often draw blood. Nick had to keep an Elizabethan collar on Jack to stop him injuring himself. If he took this off Jack then he would rip himself to shreds and start bleeding again.

Jack had been treated with cortisone and antihistamines, as well as laxatives and stool softeners for the constipation. We had a very bumpy start to our journey to get Jack back to good health. Jack had a severely compromised immune system and had protein intolerance to a number of protein’s such as kangaroo, chicken, veal, beef and fish of any kind, all of which made him extremely itchy. The only protein that he could tolerate was lamb.

The first thing we looked at was the diet and made sure Jack was fed a fresh raw food diet with no dry food.

Jack was also started on a digestive enzyme to help him with his protein intolerance and a natural anti-inflammatory to reduce the puffiness around his eyes and his very red skin. We found that Jack could tolerate Rabbit as well as Lamb, and now Jack is able to eat BARF Rabbit food for cats as well as chunks of fresh Lamb to chew. Nick has also found that Jack can tolerate Ziwipeak for cats, which he gets as a treat.

Jack is now out of his collar, his hair has grown back, his eyes are normal and he no longer has a chronic yeast infection. He is also now going to the toilet regularly and has put on weight, so he is at a healthy weight again. What is really great though is Jack is back to playing and being cheeky, which tells us that he is feeling a great deal better.